Barbara Tyler grew up in Medford, OR and was the first person in her family to graduate from college. After graduating from Southern Oregon University (then Southern Oregon State College) Barbara moved to the Bay Area and became an elementary teacher, vice-principal and consultant to school districts in the State Department of Education in Sacramento. Making a major career change, Barbara became a residential real estate agent, where she enjoyed a very successful career, honored as the #1 real estate agent internationally with Coldwell Banker. She lives in Menlo Park, California, near Stanford University, with her husband, Tom Curran, where her community service includes conducting workshops for women in Goal Setting. 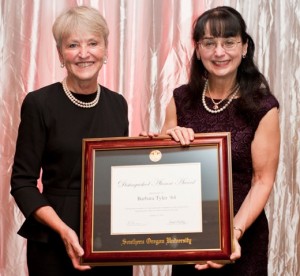 Barbara has been featured in articles in Worth Magazine, The New York Times, San Francisco Chronicle, San Jose Mercury News, The Menlo Park Country Almanac, The Palo Alto Tribune and The San Francisco Business Times. She was the recipient of the Gentry Magazine Community Stars Award for giving back to her community. On any given day, you may find Barbara hiking, gardening or working with teachers in East Palo Alto through the Adopt a Teacher program or serving on the Community Advisory Board of Directors for PAMF.

She and her husband Tom love combining hiking with vacations and last year hiked through the picturesque countryside of Tuscany and Umbria. Their favorite city to celebrate and unwind in is Paris. She is passionate about literature and founder of The Yale Road Book Club.